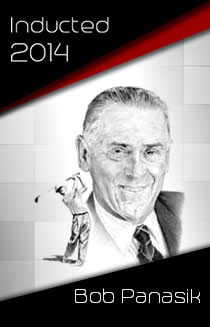 At the 1957 Canadian Open, Bob Panasik made history, surviving the 36-hole cut as a 15-year-old. Panasik would go on to play in 13 more Canadian Opens over the course of his career.

Bob represented Canada three times at the World Cup and was inducted into the Canadian Golf Hall of Fame in 2005.