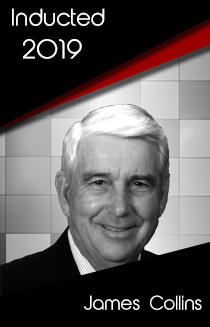 James (Jim) Collins was the Head Professional at the St. Charles Country Club until his retirement in 1997.

In 1985, Jim was selected as a Rules Instructor and Member of the Golf Canada (formerly RCGA) Rules Advisory Committee. Jim was recognized and inducted into the Manitoba Golf Hall of Fame in 2007.