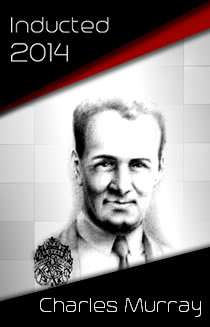 The elder Murray brother, Charles (like his younger brother Albert), was a founding member of the PGA of Canada. The longtime Royal Montreal Golf Club professional was a two-time Canadian Open champion, winning in 1906 and again in 1911. Murray also captured the Quebec Open 10 times between 1909 and 1924.

He was inducted into the Canadian Golf Hall of Fame in 1971.